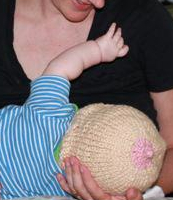 Texas representative Debbie Riddle got all the lactivists up in arms last week when she posted on Facebook that she opposed a bill that would enable breastfeeding women to sue someone who interfered with their right to breastfeed. Her argument was that breastfeeding is already legal, and a lawsuit would be going too far, and anyway there’s nothing wrong with a little modesty. All reasonable points — if she had never breastfed. Since she claims she did breastfeed, I can only conclude that 1) She only breastfed for six weeks and never left the house with her baby during that time; 2) She did scheduled feedings instead of the (recommended) on-demand feedings; or 3) Her breastfeeding days were so long ago that she just doesn’t remember what it’s like to breastfeed a newborn. Or maybe 4) She was just lucky and was never criticized for breastfeeding.

Because anybody who has breastfed a newborn out of the house — and especially anyone who’s been criticized for it — knows perfectly well that 1) Modesty in that situation is frequently impossible; and 2) A lawsuit isn’t going too far. If anything, a lawsuit doesn’t go far enough. Combine postpartum hormones, leaking boobs, a screaming baby, and a nasty look from a stranger, and that stranger should count himself lucky to walk away with a lawsuit. He could walk away with much, much worse.

So. If you are like me and live in one of the many states where even though your right to breastfeed is nominally protected, you have no legal resource if it’s questioned, fear not. You have many other recourses. Like these. Feel free to try one the next time someone gives your boob the stink eye.

1.  Throw a blanket over his head. (The critic’s head. Not your baby’s.) Problem solved.

2. Use this hat. That will make him look twice. And three times. Actually he probably won’t be able to look away. He’ll be entranced by your baby’s clever fashion sense. And who can blame him?

3. Spout statistics and facts. Most people are easily overwhelmed by science and/or numbers. Memorize the legislation citation for your state’s breastfeeding law (it’s Ga Code 31-1-9) and recite it verbatim, complete with the number. Practice this till you can say it fast. Memorize a few statistics or facts on the benefits of breastfeeding, and recite those as well. Keep talking till the naysayer gets scared and backs away slowly.

4. Laugh. And mean it. Criticism is silly. It’s nothing to get mad about. Just smile and nod and keep doing what you’re doing.

5. Squirt him in the eye. It’s poetic justice, really. He doesn’t want to see breastmilk? Let him get a closer view. It won’t hurt him.

See what I mean? Lawsuits may not be so bad.