6 warning signs your toddler may be under recall 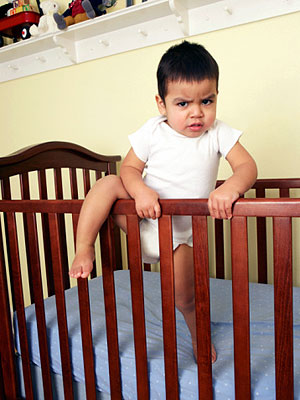 Bet you didn’t know your kid could be under recall.

In fact, chances are good that he is. Pretty much every toddler model has at least a few of the recalled features.

Unfortunately, the warning system for informing parents about toddler recalls is faulty. The problem is more the parents than the manufacturer — we spend so much time reveling in the perfection of our tiny babies that by the time they become toddlers, we stop checking to make sure everything’s okay. When your baby is little, you are constantly reading about milestones and development and when it’s safe to feed him pureed prunes. (Hint: it’s never safe to feed anyone pureed prunes. Not even organic ones. Not unless you’re really, really good at EC.) But by the time he’s a toddler, you stop worrying about all that stuff. You’re too busy stopping him from pushing a chair to the counter so he can climb on top of it and try to eat the knives. You don’t even have time to read your email. So you miss the memo.

And you figure that a kid who can unlatch the drop side of his crib (yes, those were recalled, for that very reason) and figure out how to open the baby gate on his door before he’s even had breakfast is probably developing just fine.

But if you can keep track of toddler model recalls, your child’s toddler years will progress much more smoothly. You might even find that you won’t dread the achievement of each new developmental milestone (this dread is one of the key signs that you’ve progressed from the baby to the toddler stage). I’ve been reviewing these lately, because my five month old is about to start crawling, which means he’s going to be toddling in about fifteen seconds (if he were my first child, I’d still have months to research, but since he’s my second, I’ll barely have enough time to click my heels together slowly three times). So here’s a list of the current recalls that will get you up to date.

1. Mommy’s-on-the-phone built-in alarm system. Whoever thought this feature was a good idea was clearly not a parent. The idea was that since toddlers need constant attention, an alarm would prevent moms from getting distracted while the toddler was in the room. But the setting was built to be much too sensitive. No matter how happily the toddler is playing independently, the second that Mommy gets on the phone, the alarm goes off and the toddler starts screaming. Mommy doesn’t even need to be in the house — if she’s anywhere in the vicinity of the toddler, the alarm goes off. The recall was fixed with a new part that lowers the sensitivity. Now it only goes off if you’re in the same room, not just in the same square mile.

2. Flailing and kicking while lying on back, especially during poopy diaper changes. This was intended as a safety mechanism when a toddler falls from a height. Flailing and kicking can help to turn the body in midair, enabling the toddler to use his hands to break his fall. So he breaks his hands instead of his head. Most modern parents prefer not to rely on this mechanism, opting to prevent falls instead. But the manufacturer refused to disable the flailing for safety reasons. So instead they installed an earlier potty-training system. All newer model toddlers are now compatible with EC to (theoretically) reduce or eliminate potty changes during the toddler stage. The other option is to provide extremely interesting toys during diaper changes. Preferably electronic ones (see below).

3. Sleep malfunction. This could show up as a lack of naps, an inability to sleep through the night, or any combination thereof. It could be an extension of a baby sleep defect that never resolves. But some kids sleep fine (eventually) as babies and then stop sleeping again when they’re toddlers. If you’ve eliminated other possible causes like teething or illness, car sleeping, or too-late naps, then you’ve got a sleep malfunction. Unfortunately, there’s no fix for this one. Sorry. Good luck.

4. Altimeter alarm. This is another safety falling feature. It’s an alarm that goes off when the toddler moves toward the ground. The malfunction occurs when you’re wearing your toddler (or baby; it happens with babies too) and try to sit down. The downward motion triggers the alarm, and the child fusses and cries until you stand back up. They’re still working on a fix for this one. The only way to disable the alarm currently is by breastfeeding in the carrier. You can also simply avoid sitting down while wearing your child. Moms never need to sit down anyway.

5. Picky eating. This was also intended as a safety feature. In a hunter-gatherer society, toddlers benefit from a hesitation to try new foods. In the developed world, however, it translates into resisting any meal that doesn’t consist of crackers, peanut butter, and ketchup. Manufacturers are still working on this one. In the meantime, you can bypass resistance with techniques like self-feeding from an early age, disguising healthy food, and offering interactive eating opportunities (read: dips).

6. Electronics dismantling ability. This is a feature that’s only appeared recently. Due to their rapid brain development, it turns out that toddlers are much, much faster at learning how to use new technology than their parents. So while you’re still trying to figure out how to install iTunes on your iPad (hint: it comes installed), your toddler has jailbroken it and installed Legends of Zelda. Fix: Don’t get an iPad.

Am I missing any? Does your toddler have some features that should be recalled?