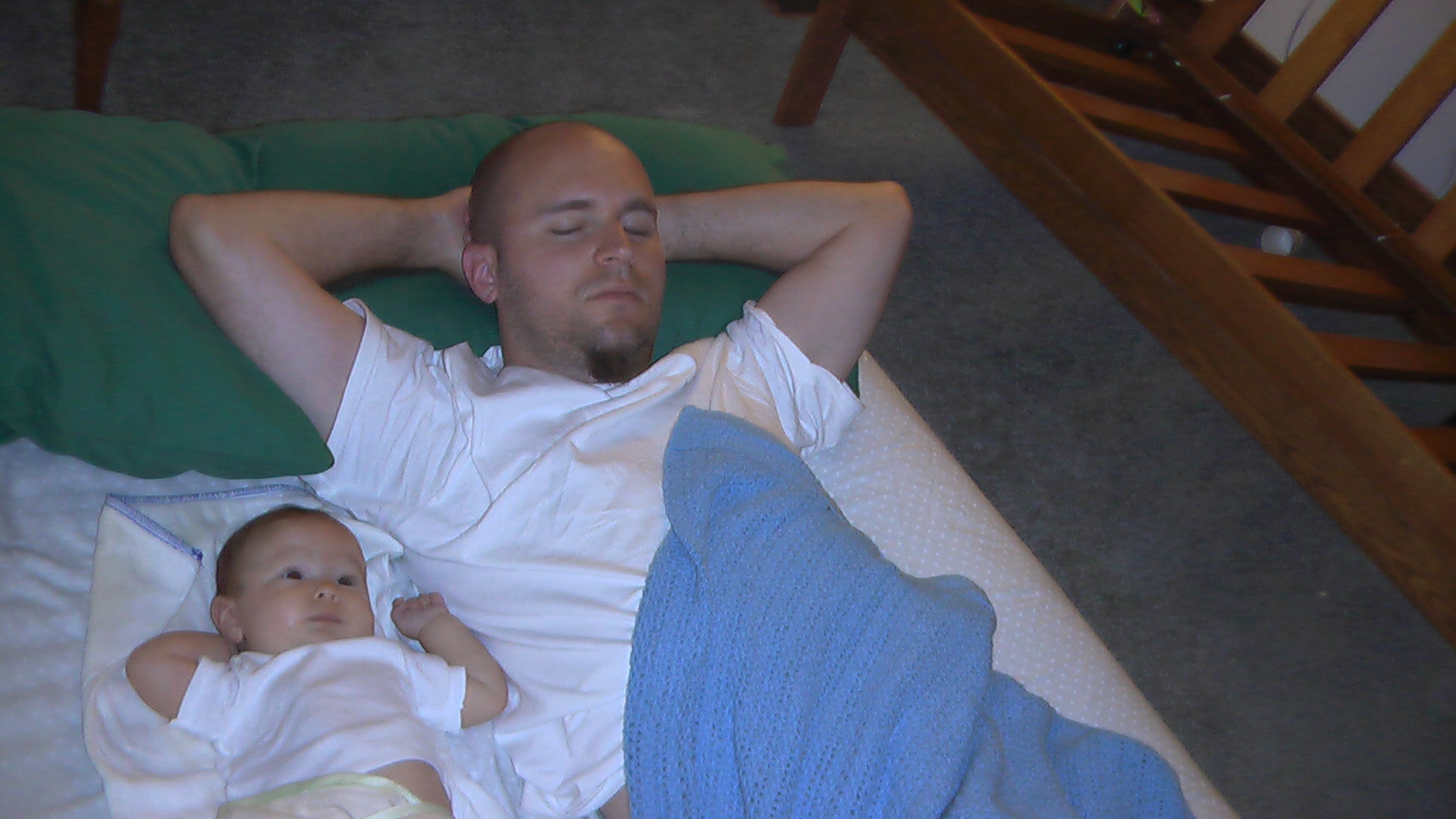 With the latest crib safety standards that came into effect this summer, a lot of used cribs are being taken off the market. All drop-side cribs are now considered unsafe, and there are a lot of other new standards as well. If you bought a crib before June 28, 2011, chances are good that it doesn’t comply with the new safety standards. So much for reusing and recycling. If you want your baby to sleep in a crib that complies with current safety standards, you pretty much have to buy a new one.

And you can’t even resell your old one to offset the cost.

Fortunately, cribs are actually a very recent invention in human history. They are not the only place where babies can sleep safely, and they’re certainly not the most environmentally-friendly place for babies to sleep, either. There are a lot of places where your baby can sleep that don’t require you buying a brand-new piece of expensive furniture.

1. Cosleeping. You’ve probably heard plenty of criticism of cosleeping–it’s hard not to. Plenty of people (including experts) will tell you that cosleeping will kill your baby. But the reality is that a lot more babies die from SIDS (which, frighteningly, used to be called crib death) than while cosleeping. Practiced safely, cosleeping has a lot of benefits. It promotes breastfeeding, usually means better sleep for everyone, and helps regulate your newborn’s temperature and breathing. It’s usually least safe in families who do it as a reaction to poor sleep instead of planning intentionally to do it. So even if you don’t plan to cosleep, it’s a good idea to know the cosleeping safety guidelines and to have your room and bed ready if you find yourself lying down with your baby out of desperation in the middle of the night.

If you’re planning to cosleep, I recommend getting rid of your bed frame and just sleeping on a mattress on the floor. And spend the money you saved by not buying a crib or a bed frame on a nice organic latex or foam mattress. Ours has spoiled me for any other bed.

2. Baby Hammock. The Amby hammock was recalled a couple of years ago, resulting in a furor of concern about baby hammock safety. However, hundreds of crib recalls over the years haven’t caused us as a society to ditch cribs, and one hammock recall shouldn’t cause us to ditch hammocks. (Also, Amby did manufacture a replacement part to correct the defect, so if you get one, be sure you get the additional part.) Many babies love hammocks because the cradle position, combined with the rocking and bouncing of a hammock, mimics their experience in the womb. Hammocks use a lot fewer materials and resources than cribs–mostly fabric (often organic cotton) and some metal for the frame. Like cosleeping, hammocks are a common way for babies to sleep in many parts of the world and have been for generations. Personally, I would hesitate to put a newborn in a hammock (but I wouldn’t let a newborn sleep anywhere but right next to me, where I can feel that she’s breathing!). But I used one with my daughter from about six months on (although she only liked it for naps).

3. Floor bed. Baby proof the room, and your baby can sleep on a mattress on the floor. You’ll never have to worry about falling off–even an infant won’t be damaged by rolling off a mattress that’s inches thick–and you’ll never have to worry about transitioning to a “big kid” bed, either. Again, you’re using a lot fewer resources and materials than an entire crib. If you’re using this method for a very young baby, I recommend using a crib mattress (again, spend the money you saved by avoiding the furniture purchase and get a nice organic latex one!). With a crib mattress, you know it’s firm enough to meet the safety standards for infants. They’re also thinner than regular mattresses, so once your baby starts rolling, there’s even less distance to the floor. Floor beds are very common in many parts of the world; they were also the sleeping arrangement recommended by Maria Montessori. A floor bed can actually help promote independence, since the baby can explore his room before bedtime and after he wakes without having to cry to get out of his bed. My daughter moved from cosleeping (in our mattress on the floor) to a floor bed in her own room when she turned three. I will say, though, that when we travel she does have a tendency to roll off of higher beds. Probably because her preferred sleeping spot at home is in the crack between the mattress and the wall. She’s never been injured by it (she is three, after all), but I always put pillows on the floor next to her bed when we travel, just in case. When she was littler, we did have quite a few instances when I insisted on pulling the hotel mattress off the frame and putting it on the floor. Let me just say that’s a total pain. With the next baby, I’ll bring a crib mattress. Or heck, a large, flat, firm pillow on the floor (like the ones I have for my deck chairs) would probably work just fine!

4. Pack and Play. These are only recommended as a temporary sleeping arrangement, I think because the bottom isn’t really firm enough for a baby to sleep on comfortably. But I do know a lot of people who use them. They’re a lot cheaper than cribs, and they don’t get as many recalls. But they’re usually made of mostly plastic–not the most organic alternative. Personally, I’ve never owned one, and I don’t see much advantage of using one over a crib. Probably just too mainstream for my hippie self.

5. DIY Beds. Is it unsafe to make something from scratch for your baby to sleep in? It depends. If you’re talking about a crib, then yes, absolutely. But if you’re talking about, say, a floor bed, then no. My sister, for example, slept in a cardboard box on the floor as an infant. My grandmother was horrified. But my sister preferred it–even after my grandmother bought a cradle for her, she refused to sleep anywhere else for months. She loved to snuggle into the corner of the box. And hey, there are no slats, nothing to fall out of, no soft bumpers: very little pieces to make it unsafe. Sure, she looked like a puppy, but her box was probably a lot safer than many cribs. Dresser drawers, pulled out of the dresser and placed on the floor with some blankets as liners, were once a common place for babies to sleep. And a friend of mine made a soft fabric basket for me to use like a Moses basket for cosleeping when my daughter was little. Like the Amby, I used it more for naps than cosleeping, but my daughter still likes to curl up in it sometimes (and it’s nice for storing toys, too).