Yesterday, I was honored to have a guest post at Natural Parents Network. I wrote about something I haven’t talked a lot about on this blog: my daughter’s diagnosis with sensory processing disorder. I hesitate to write about this much, because, well, I don’t want her to feel labeled. And honestly, it’s not as bad as it sounds–talking about “diagnosis” and “disorder” make it sound so awful and official. Really all it means is that she’s sensitive. Extremely sensitive. Okay, so sometimes she screams like a knife is cutting her if she steps in a puddle of water. But she doesn’t have any developmental delays or anything (she’s very advanced in most areas, actually). I don’t think it’s affected her much physically or developmentally. Emotionally–now that’s another story.

For a long time, it was hard to separate how much of her behavior and just general difficulty with getting through the day was caused by sensory issues and how much was caused by lack of sleep. Ultimately they were all connected, since the sensory problems were at the root of the sleep issue, but the sleep was the main reason it took me so long to realize that something more was going on than just a dramatic personality and a pathological hatred of naps and bedtime. When she finally did start sleeping (thanks to help from our wonderful doctor), I think I kind of expected everything else to magically fix itself. No more meltdowns in the grocery store (or not totally unpredictable ones, anyway). No more hour-long fights over getting dressed and brushing hair. No more unprovoked attacks on her friends. No more inexplicable screaming at me because I set her cup down in the “wrong” place.

And sleep did help. A lot. But not entirely. Some things still bothered her, like the way her socks fit or the feel of water when she’s washing her hands. But as I learned more about sensory processing and how to treat it, I discovered more tools for helping her manage sensory input. I developed a list of activities that help calm her and regulate her system.

What really amazed me, though, was the realization of how much my parenting style had developed to meet her sensory needs.

Take, for example, babywearing. One of the main treatments for kids with sensory processing, especially tactile sensitivity, is full-body deep pressure. One of the best ways to get get this pressure is with a sensory swing. Like this:

Which looks an awful lot like the place where my daughter spent most of her first year of life: 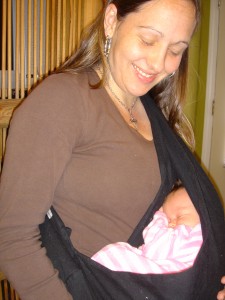 (This sling is actually too big for me, and she’s riding too low in it. Sorry. I didn’t know how to properly use a sling yet. I don’t have a good picture of her in the ring sling because I didn’t have time to take pictures during that stage of life! But you get the idea.)

Or take baby-led weaning. I never gave my daughter mashed foods; we went straight to table food at six months. And she quickly gravitated toward meats, vegetables, and fresh fruits. Now, I’ve learned  that chewing is actually a calming activity for sensory kids (if she’s starting to have a meltdown, I give her gum. The meltdown stops instantly). Did giving her the opportunity to chew food from the time she first started eating help regulate her system? I don’t know, but I do know that snacks have been an essential tool of my parenting kid for keeping her calm and happy for most of her life. Of course that’s true for any kid, and it’s partly because hunger causes meltdowns, but I wonder whether mashed baby food would have been as effective in calming her. Honestly, I doubt it.

I could go on with lots of examples of how I developed practices, even in her infancy, that helped meet her sensory needs long before I knew she had them. But it’s not really that important what I did, because every kid is different, and every parent is different. What I want to point out is this: You know your kid better than anyone else. Your instincts are more powerful than you know. What makes your kid happy may seem strange to someone else, but if it works for you–then it works. And you may not know till later how well it really is working, or how necessary it is. A friend of mine who’s a therapist (and who first suggested that I have my daughter evaluated for SPD) told me recently that she thought my parenting had a direct effect on how much SPD impacted my daughter’s development. “Your daughter’s issues seem really mild,” she told me, “but I think it’s because you parented her the way you did. You’ve been treating her all along without even knowing it. And I think she would have a much harder time functioning now if you hadn’t responded the way you did then.”

Will how you respond to your child now make a huge difference in your child’s future development? No one can know that for sure. And if you have a high-needs child, and meeting their needs is causing you to neglect your own needs, or the needs of the rest of your family, then you have to change that. Life can’t continue like that. (Believe me, I have been there! I know!) But if you’re doing your best to meet your child’s needs, even in ways that go against conventional wisdom or the advice of friends and family, ways that feel right to you even though they’re difficult or unusual, then I want to speak to you from the other side of that journey. Not that I’m finished with the journey, but I’ve reached a place where life is manageable–amazingly manageable–and even easy most of the time. And standing here,, I want to tell you that it was worth it. Every sleepless night was worth it. Every hour of nursing was worth it. To be able to look back now and say that I made choices that felt right to me, and to say with confidence that my instincts were right and that my choices benefited my daughter and our family–that is worth it.

And you know what? It doesn’t matter what those choices are. Sure, there are some choices that are just wrong no matter what, but if you’re making those kinds of choices, chances are good that you’re not reading this blog. And as long as you are following your own instincts about yourself and your kid, there is a wide range of choices that aren’t just good or okay–they’re best for you. I don’t care if you had a natural birth or a cesarean section, if you breastfed or formula fed, if you use cloth diapers or Pampers, if you coslept till age six or sleep trained at six months. No matter what anyone else tells you, you should make the choices that seem right to you and then don’t regret them. Don’t let anyone make you feel guilty for the way you parent. Because you are the only one who knows yourself, your kid, and your family. You know even better than you think you do. Trust yourself.

You might discover that you’re meeting your child’s needs in a way you didn’t even understand until much later. You might never understand why your child needed whatever it was that you did. But that doesn’t mean your choice wasn’t right.