cloth diaper addiction: why I love my fluff

My name is Lisa, and I’m a cloth diaper addict.

I don’t know when it started, but it’s been going on for a while. It was sometime around the birth of my first child–before she was born, I thought diapers were gross, even cloth ones. I remember being disgusted by the idea of buying used cloth diapers (something I now do almost exclusively). Maybe it was seeing how cute her little bum looked in the diapers. Maybe it was the personal satisfaction of knowing I was doing something to help the planet. Or maybe it was just the in-group pride of knowing how to do something that most parents don’t. But at some point, I went from using cloth diapers to loving them. From there, it was just a small step to full-blown addiction.

An addiction is always a little embarrassing, but this one is particularly embarrassing, because I’m supposed to be the diaper-free mom. I’m a member of the executive leadership council of DiaperFreeBaby, and as a local Mentor, I teach workshops and lead support groups to help parents not use diapers. And I do give my baby diaperless time. I swear. Quite a lot of it on some days. It’s just that in our society, I feel more comfortable using diapers as back-up when we’re out of the house. It’s kind of like breastfeeding in public: some people are perfectly comfortable whipping the boob out proudly for all to see, and some are more comfortable if they use a cover. I frequently potty my baby in public–it’s not that I’m embarrassed about it–it’s just that I don’t feel comfortable risking my baby peeing on somebody else’s carpet. And sometimes, I don’t feel like letting him pee on my lap either.

And anyway, it’s not like my diapers are essential. They’re decorative as much as practical. In fact, I use cloth diapers as an advertisement for EC: when people comment on how cute they are, I tell them that they’re easy when you’re also practicing EC, because you hardly ever have to deal with poop and who minds washing a little pee?

All that to say: I don’t think I’ll be giving up my addiction anytime soon. In fact, I plan to take full advantage of it with this baby. I know from experience now how short the diapering stage is (especially for EC kids), and I plan to enjoy it to the utmost.

And so, even though I currently have enough diapers to comfortably diaper from birth to potty training (obviously, since I already did it with one and I’ve never sold a diaper), I want to get more. Now that I know exactly what I like in a diaper, I want to round out my stash so I have what I need for every situation. My husband is open to the idea of buying more diapers, but he wants me to get rid of the ones that don’t match so we have only one kind of diaper (preferably all-in-ones or pockets with velcro, so he can use them without having to do origami). But even though I do want more Fuzzi Bunz pockets, I really don’t want to get rid of my other types of diapers. Having lots of different kinds of diapers is helpful, especially when you’re practicing EC. Here are a few of the types of diapers I want more of: 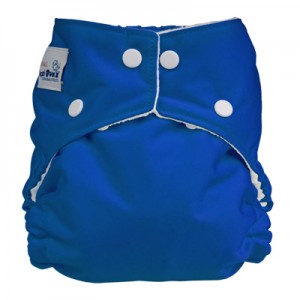 Why I love them: These are simple, easy for anyone to use, and quick-drying. I prefer the Fuzzi Bunz snaps to any other pockets that I’ve tried because they’re trimmer and fit better under clothes. I also love their one-size diaper, which is unique in that it lets you separately adjust the elastic for both the legs and the waist (most one-size diapers only let you adjust the rise).

When I use them: Pockets have a layer of microfleece directly against the baby’s skin, which helps wick moisture away and helps the baby feel dry. (Not as dry as a disposable, but more so than anything with just cotton against the skin.) For EC this is actually a disadvantage, because you want the baby to get immediate feedback from his body when he’s wet, but sometimes, it’s nice to be able to leave a diaper on for two pees. I like to use Fuzzi Bunz when we’re driving somewhere and I don’t want to worry about peeing or changing him every time, or when we go out to eat or something and I want to be able to sit down and enjoy my meal without running to the bathroom to pee the baby multiple times. Right now I don’t have to do that with Teddy, because he sleeps a lot and holds his pee longer than Anastasia did, but she went through stages when it was really nice to have a pocket diaper to just leave on her for a while. I also like these at night, for the same reason–sleep trumps potty in my world, so if a baby will sleep better with a stay-dry layer, then gosh darn it I’m using it.

Pockets are also great for caregivers who aren’t comfortable (or just aren’t very good) at offering the potty, like babysitters.

Most of the time I still practice EC consistently while my baby is wearing a Fuzzi Bunz, but I like to have these when I don’t want a miss to be a big deal. I don’t think I’ve ever put one on him at home (except at night), but when we’re out and it’s harder to get him to the potty immediately or change him instantly when he pees, then Fuzzi Bunz are a nice back-up. It’s also nice to feel confident that if I do miss a pee (or even two), I won’t need to change his clothes. 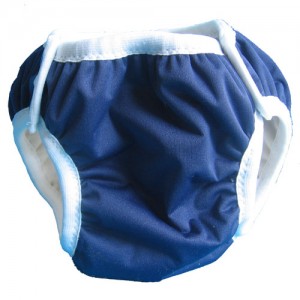 Why I love them: Because they’re awesome. They’re really, really trim, but they hold one pee without leaking really, really well. They hold solid poops well too (although I don’t know how much I would trust them for newborn poops; I’ve never tested them for that). I like them waterproof (because if I’m not going diaper-free then I might as well have something that will truly keep clothes dry) and with side snaps (in case of poop misses, and also because they’re easier to get off that way, and because that allows some adjusting for size). They have pure cotton against baby’s skin, so baby will feel wetness immediately, but they don’t leak unless you leave them on for several pees. And they are seriously as trim as a disposable. Just way cuter. They also have elastic all around the waist (instead of just in the back), so you can pull them down instead of unsnapping them for a quick potty opportunity. I think if I had a full collection of these, I might just use them exclusively, because I love them so much.

But then I remember how much I love options, and I realize I would still use other fluff occasionally.

When I use them: When we’re going out but I still want to keep focusing on EC. Right now I only use them when we’re having a really good EC day, because I only have two of them in size small and I hate it when I put one on and then he immediately pees in it. It feels like such a waste to not be able to keep him in it for longer. But like I said, if I had more of these then I would use them most of the time. I would love for these to be my go-to “diaper.” I might even start using them at night if I had enough, which would inspire me to try EC more at night.

Why I love them: I’ve written before about my recent conversion to flat diaper love, so I won’t add to that except to say that since I got these, I really love using them in public. They make me look like a super cool cloth diaper expert who does origami. (My favorite way to fold them is actually called the origami fold. It’s the only kind of origami I’ve ever been able to do.) But changing a flat definitely requires laying the baby down on his back, unlike the snap diapers which I can easily change on my lap, so that makes them harder to use on the go.

When I use them: Right now I use them when my other diapers are in the wash. Teddy has pretty much outgrown almost all his prefolds, but he’s not big enough for medium diapers, and flats are the one thing that always fit. Along with the one-size and small Fuzzi Bunz and a few trainers, that’s all I have that fits him right now. (So you see that despite my overwhelming stash of diapers, I still have to wash them every day or so, which means I really could use some more.)

I’ve also been using receiving blankets folded as flats for my overnight diaper, and they’ve worked better for Teddy than anything else I’ve tried yet.

However, the main reason I want more flats is for traveling. Due to a new job my husband just accepted, it looks like we are going to get to do some serious traveling this summer. I don’t want to publicize details for fear it won’t work out (I’m afraid I’ll jinx it), but the chances are good that we’ll be going to Europe, and we may not have much access to laundry facilities. So I plan to exclusively use flats on this trip. They’re small and light to pack, they’re easy to use, and they can be washed by hand and hung to dry overnight. They also are very forgiving when it comes to washing methods–unlike pockets and even trainers, which require specific detergents, you can get away with washing flats in pretty much anything, as long as your baby doesn’t have super-sensitive skin. And, of course, flats are so cheap, it’s just silly not to have a good stash of them.

Right now, those are the diapers I love the most. If I had to, I could de-stash to just those three types for now. But I’m sure that at some point, as Teddy grows and his needs change, I’ll love other diapers more. And this is why I can’t stop buying more. Because no matter how happy I am with my current stash of diapers, there’s always something else that I think might work better. And my philosophy in life has always been that if something isn’t broken, you can probably make it better.

What about you? Do you manage with just one type of cloth diaper, and if so, what are they? Any other moms out there addicted to constantly trying new types of diapers?