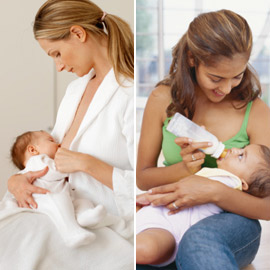 I’ve been following several interesting threads on facebook this weekend, and I realized this morning that they have a common thread: infant feeding. More specifically, the controversial topics surrounding infant feeding. There’s a lot more to the controversy than breast vs. bottle. I don’t usually post link roundups, but, well, today I just had to.

Since I usually do a True Confession Tuesday post, I’ll start with this link and confession: I would really like to cross-nurse. I haven’t, but only because I couldn’t find a willing friend with a similarly-aged baby. I didn’t even donate milk with my daughter, which is an even more embarrassing confession when I think about how much extra milk I had. I had oversupply (to the point of engorgment) till my daughter was 14 months old, but I had no idea of the many opportunities for sharing my milk with babies who need it until she was quite a bit older.

It’s actually surprising to me that this is such a controversial topic, but apparently a lot of people think sharing milk is gross.  Certainly, there are health concerns, and personally I’d want to exchange medical records before I exchanged milk with a friend (milk banks, of course, screen donors extensively). But one person on the facebook thread said that the biggest concern with sharing milk is not disease but milk storage and preservation, which many mothers (myself included) are surprisingly uneducated about.

Which brings me to my next point: education on safe feeding can be hard to get–especially for those who formula feed. It’s no secret that I’m a big fan of breastfeeding, but I recognize there are situations where formula is helpful or necessary, and I found this post about the difficulty of getting information on proper formula preparation and storage disturbing. Apparently even some doctors don’t give (or have?) much information about proper formula preparation. Now, I don’t plan to ever use formula, and I hope I never have to, but I know people who really do have to, for very good reasons (and even if they’re getting all the donor milk they can, it’s almost impossible in our society to feed your baby exclusively on donor milk, so they still have to supplement). One friend of mine pointed out that there’s often political resistance to using public funds for educating moms on how to use formula, because that money would be better spent on promoting breastfeeding. There’s also a mindset that educating about using formula is tantamount to promoting/encouraging it. But I think there’s a difference between informing moms about formula protocol and encouraging them to use formula. Just like when I’m taking a childbirth class, I want one that will inform me about c-sections and inductions and other interventions, even though I’m planning a natural home birth with no interventions. I want to know what the possibilities are and how to decide for myself if they’re necessary, so I’m not caught off guard.

My final link goes back to the “gross” factor that many people seem to feel in connection with breastfeeding and breast milk in general. It’s a Graham Norton show titled “Breast is Best.” He interviews three performers (an actress, a singer, and a comedian) about their breastfeeding experiences. This could have been cute if it had just been about the host being amazed by information that every breastfeeding woman knows but hardly anyone else does, like the fact that you can squirt milk long distances (“I can hit that camera over there,” Toni Collete says at one point, which cracked me up), but this clip irked me because of its focus on the contrast between the mother’s sexy roles as performers and their roles as breastfeeding mothers. One of them admits that she quit breastfeeding when her baby was three months old because she was playing the part of a prostitute, and she felt uncomfortable nursing her baby while dressed for the role. I can understand feeling uncomfortable with your older baby seeing you dressed as a prostitute, or whatever, but really?–that young a baby isn’t going to remember or understand any of that. I can’t fathom it being a reason to wean. I’m guessing she had plenty of good reasons to wean and that was just the one she mentioned, but I found the whole attitude about it disturbing. Why should it matter how you’re dressed when you’re breastfeeding? The baby doesn’t care.

And without going too deep into the controversy of sexuality and babies, let me just point out the obvious fact that sex and babies are inextricably linked. The point of sex, biologically, is to make a baby. Big news, right? So why does it seem to feel like such a big deal?