diy costumes and dressing up 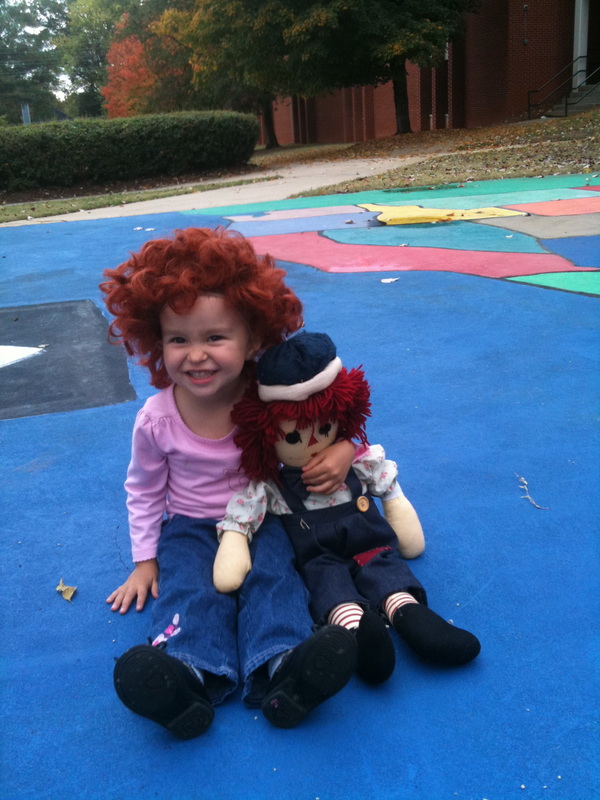 Today at Natural Parents Network, the Wordless Wednesday theme is dress-up play. Somehow I missed the invitation to submit for this, which is a shame, because I have a lot of pictures of my daughter dressing up. If I had submitted a picture, I think I would have chosen this one:

The wig is from her Little Orphan Annie costume for Halloween last year, but the thing I love about this picture is the fact that she and Raggedy Andy look so much alike. He could be her little brother!

The Annie costume was even more fun when our whole family got involved, though. We won the Grant Park costume contest as Daddy Warbucks, Annie, and Grace: 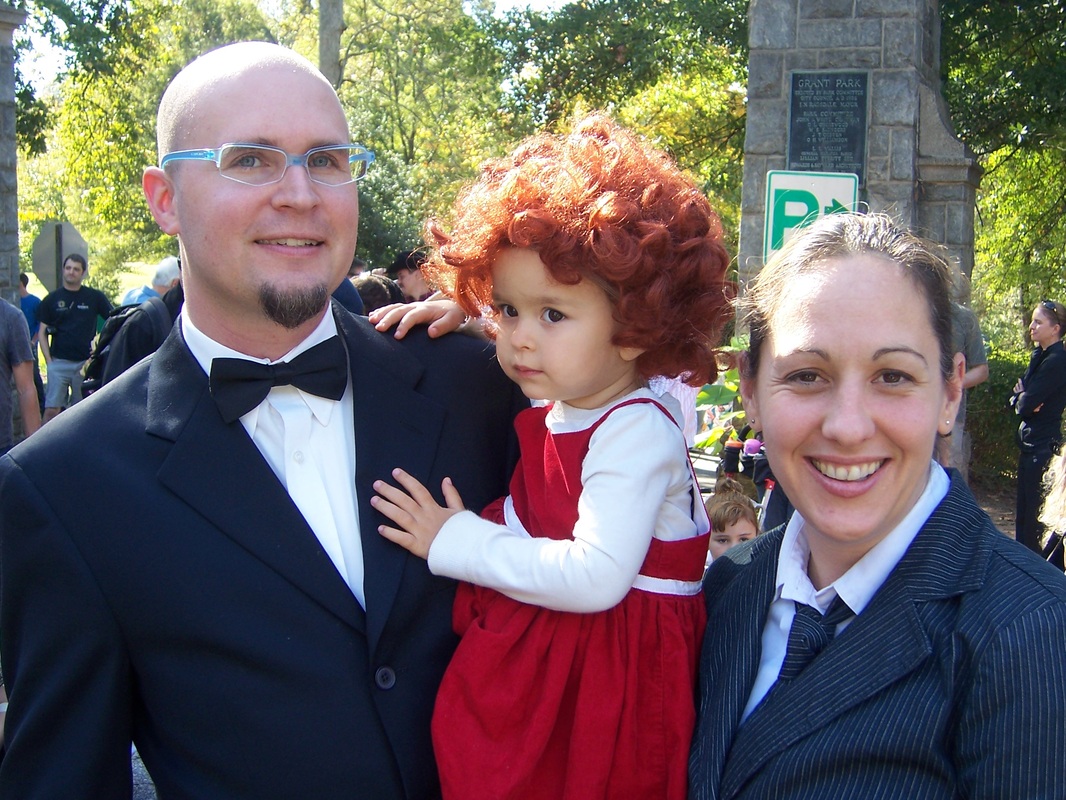 (She looks really serious in this picture, but she was actually singing “The Sun Will Come Out Tomorrow” at the top of her lungs for most of the parade. Which I’m sure is the real reason why she won!)

But the best part about that costume was how easy it was to put together. The red dress was given to us by a neighbor with an older daughter in a bag of hand-me-down clothes. Both of the suit jackets were clothes we already had. I bought the wig and the bow tie. And my husband’s Daddy Warbucks bald head, like my daughter’s singing ability, was a gift of nature.

But of course, most of the time when my daughter dresses up it’s for no reason at all. She wears fancy dresses, well, pretty much all the time. Like this one: 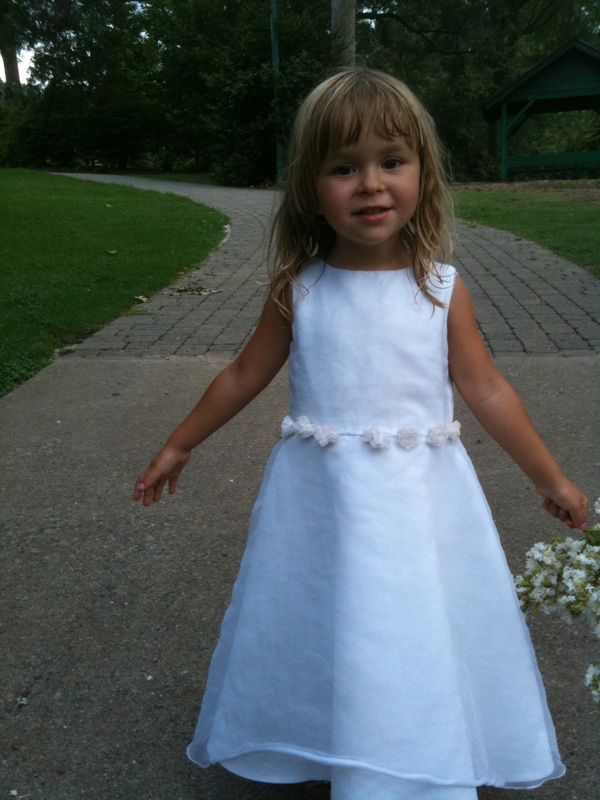 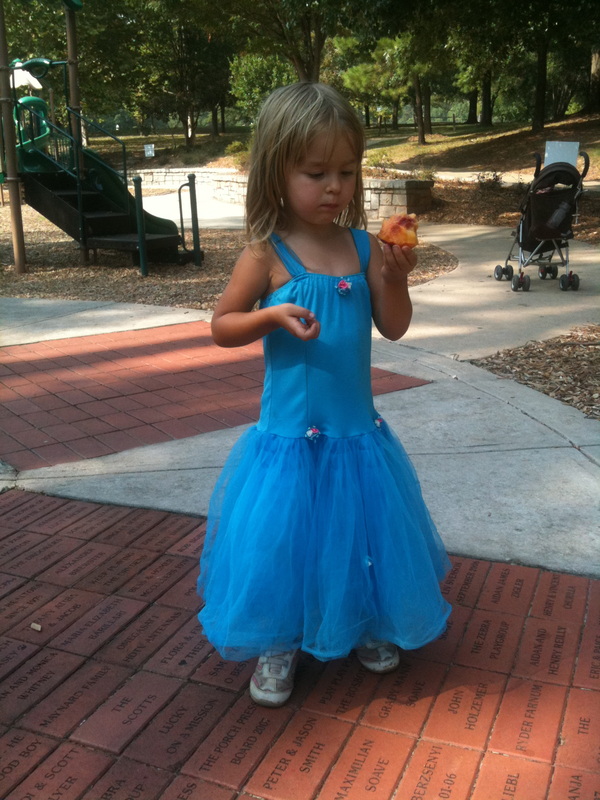 The second dress is going to be the base for Anastasia’s Halloween costume this year. (Yes, I said “going to be”…no, it’s not ready yet.) She wants to be Cinderella, so the blue dress is a good start for her costume. I just have to modify it slightly to make it look more like Cinderella’s dress. Without sewing, of course, because I gave my mom’s sewing machine back (and really, I’m not that talented anyway). Then I have to put together a king and queen costume for me and Matt. All in a couple of days. No big deal, right? Actually, I think it’s going to be pretty easy. Here’s Cinderella’s dress so you can see what I’m going for: 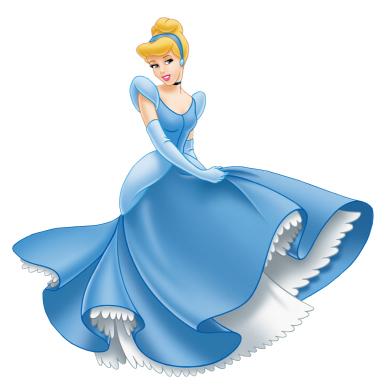 And here’s my plan to transform her current dress into something more Cinderella-y:

1. Buy a pair of long white gloves. I already got these from a costume store for about $5. They’re a bit big for her, so I’m not sure if she’ll be willing to wear them, but I’m sure they’ll be useful for many costumes in the future even if they don’t get used much this year.

2. Use a piece of light blue tulle that we have for her dress-up box (someone gave it to us a few months ago) to create little cap sleeves. I’ll do this by cutting two short pieces of tulle and pinning them (with safety pins) to the armpits of the dress.

3. Use the same blue tulle to create the decorative bit around the waist and hips (what is that called anyway?). I’ll drape it in several loops and pin it in place.

5. I was going to add a white petticoat under the dress, but I haven’t been able to find one. If I run across a cheap, twirly, white skirt, I’ll get it, but I think the costume will be fine without it.

And that’s it! She has pink sparkly shoes that she always pretends are glass slippers, so that’s taken care of (those were also given to us by a friend whose daughter was too big for them). I think I’ll probably spend less than $10 (not including the dress, but we bought that last summer).

Then I just have to figure out what the heck to do for me and Matt. I have a queen-ish dress that I wore the year I was pregnant with Anastasia that I can probably still fit into (that year I dressed as the Queen Mother), but it could use some sprucing up. And I have a robe that could be the start of a king costume for Matt, but he says he won’t wear a costume unless it looks awesome. And I refuse to spend lots of money on costumes, no matter how awesome. So that’ll be the challenge for the next three days.

I’ll post pictures next week…unless I fail in my costume-making skills, in which case I’ll have to hide in shame all weekend!