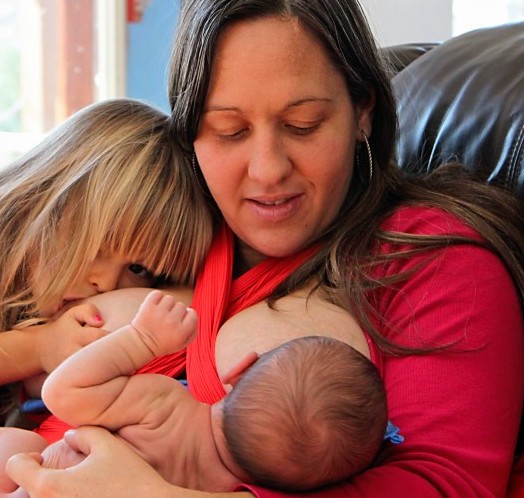 If you’re on Facebook and you follow any of the natural parenting groups there, you’ve probably heard about the breastfeeding pictures problem.

The issue has to do with Facebook removing pictures of breastfeeding mothers as “sexually explicit content.” Some moms have had their accounts flagged or shut down–even though Facebook’s official policy states that breastfeeding pictures are okay.

Personally, I think even their official policy leaves something to be desired–they say that a “fully exposed breast where the child is not actively engaged in nursing” violates their policies, but many states have laws exempting breastfeeding mothers from indecency laws, “irrespective of whether the nipple is exposed incidentally to breastfeeding.” It’s normal for a baby to pop on and off, and seeing a woman’s nipple while she’s breastfeeding shouldn’t be that big a deal. Really.

So, of course, some moms have decided to protest this policy with a nurse-in. And not just a virtual nurse-in of pictures on Facebook (there’s already been one of those), but an actual physical nurse-in at Facebook headquarters, where all the Facebook employees work. And, wouldn’t you know it, it turns out there’s a Facebook headquarters in Atlanta.

Now, even though I love breastfeeding, and even though I breastfeed uncovered in public all the time, I’m not sure that I would consider myself a “lactivist” (that’s a lactation activist, for those of you who aren’t up-to-date on all the latest natural mama lingo). I do want our society’s attitude toward breastfeeding to change, but I don’t really like making a big deal of it, mostly because the way I think things need to change is by making it not a big deal. I mean, if my baby is hungry, or upset, or just generally fussy, I’m going to offer him the boob. I’m going to do that no matter where I am, no matter who’s watching, and I’m not going to cover it up because I’m lazy and getting a blanket out is too much work. I don’t mind people seeing it because I think people need to see it so they’ll realize it’s normal and not a big deal. But doing activism about people’s attitudes is kind of counterproductive in my mind. Activism about legislation–now that I can get behind, especially legislation that would actually make it easier for women to breastfeed like paid maternity leave. But going out and actively trying to change people’s mindsets about breastfeeding?–it seems silly. Offending people doesn’t change their mindsets–it only makes them more set in their ways.

Despite that, I actually kind of like the idea of a nurse-in. I’ve never been to one (although many of my playgroup meetings may as well have been one, especially if we happened to meet somewhere like the park instead of somebody’s house), but it sounds fun. I think it would be fun to go hang out in a public place with a bunch of other moms and meet some cool people and make friends and chat about how fun breastfeeding is. Oh, and breastfeed while I’m doing it, because, you know, my baby will want to eat at some point during that time.

So the nurse-in at the Atlanta Facebook headquarters is next Monday, from noon to 3 pm, at the headquarters on Marietta Street downtown. I think I’d like to go. Anybody else thinking about it?

Or, as crunchy mamas say, Do you want to carpool to the nurse-in?

If I do decide to go, I have to decide whether to bring Anastasia with me or not. If I do, she will definitely want to nurse when she sees all those babies on boobs. Which would mean I would either have a screaming preschooler or I’d be tandem nursing a baby and a three year old on the steps of the Facebook headquarters. I can’t do that without both boobs pretty much fully exposed. Something tells me that would push me squarely into the category of lactivist.

And I would probably have to take a picture of that.