how sharing breastfeeding can change your life 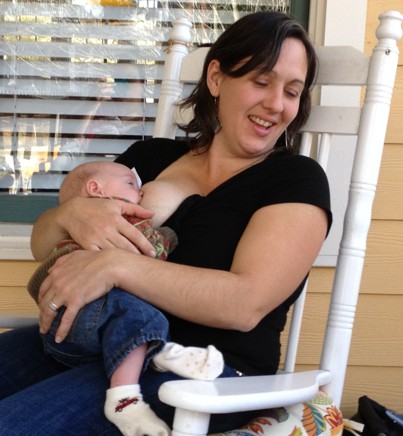 Our culture is squeamish about breastfeeding. We think breasts are sexual, breastfeeding is a private act, and breast milk is a dangerous substance that spreads disease, pestilence, and subversive thinking. Sure, breast is best and all that, but keep it in private, people. And nowhere is this more obvious than in our attitude toward cross nursing.

Cross nursing, in case you don’t know, means nursing someone else’s baby. It was common as daylight a hundred years ago, when wet nurses were employed by women who couldn’t or didn’t want to breastfeed. But since the invention of formula, cross nursing has been stigmatized. Even the “lactivist hippies” of La Leche League discourage it, and the average woman on the street is disgusted by the idea. Sure, the breast-is-best movement has sparked a small but noticeable revival of wet nursing. But those who do it are secretive about it.

And when it happens accidentally? Bad news. This woman’s baby was breastfed by another mom last week because of a hospital mix-up. This ought to have sparked an outcry about hospital procedures that involve separating babies from their moms (this could never have happened if the babies were rooming-in), but instead the hospital is saying that the poor baby needs to be repeatedly tested for HIV and hepatitis over the next year. Seriously? Was the other mom HIV positive? Because if she was, then why was she breastfeeding her own baby? And if she wasn’t, then why the worry? Sure, I’d be concerned too if my baby was breastfed by a total stranger, but I don’t think it deserves this level of fear. But maybe that’s just because I’m a crazy hippie mom who always wished for some help breastfeeding my babies.

I haven’t done much cross nursing, but I often wished to. I finally have a mama tribe now that’s comfortable with cross nursing, and it really has changed my life. Here’s how.

You can take a break. Having a babysitter who can nurse your baby is magic. Baby won’t take a bottle? No problem. Baby will only fall asleep nursing? Taken care of. If I’d had this when Anastasia was little, let me tell you, I would have had a lot more evenings out with my husband. I haven’t actually taken advantage of this with Teddy, because right now if I skip or even shorten a nursing session, I get mastitis. (At least it seems that way.) Which brings me to my next point:

You can get help with engorgement when you’re away from your baby. Last weekend I went to a party with my mama tribe. I left both kids at home with Dad — my first time doing that, so it was a real treat! But three hours away from the kids? Not good for my boobs. Lucky for me, my friend who has twin newborns was at the party. While she was nursing one, she handed me the other, and I nursed him to sleep.

You can learn to breastfeed. When my friend handed me her second twin, she told me I could breastfeed him if I would fix his latch. He makes a clicking sound. I wasn’t able to fix it — I suspect he has a tongue tie — but it made all of us at the party think about the value of experienced moms breastfeeding new babies. After all, when you have your first baby, you’re both totally new at breastfeeding. You learn to do it together. Which is why it’s often easier with your second baby — by that time, at least one of you knows what you’re doing. So if a first-time mom is having a problem breastfeeding, it just makes sense for a more experienced mom to try breastfeeding her baby. She knows how a good latch is supposed to look and feel, and she knows how to hold a baby and help him latch. It takes one variable out of the equation.

You can bond with other mamas and babies. I don’t agree at all with the idea that breastfeeding is a special, private bonding. (In case you hadn’t figured that out.) At least I don’t think it’s any more private or bonding than bottle feeding, or rocking to sleep, or babywearing. But that doesn’t mean it isn’t special. I love rocking other people’s babies to sleep and bottle feeding them, and I love cross nursing in the same way, for the same reasons. Knowing that another mom trusts you enough to help her take care of her young baby is a special thing. Cuddling, rocking, and bonding with someone else’s baby is a special thing. And having friends that you trust like that, and who trust you, is pure magic.

You can do it safely.  I mentioned that I thought the mother, not the baby, was the one who should be tested. And ideally, I think moms who are nursing each other’s kids should be tested. I wouldn’t let anyone breastfeed my babies before I asked them what they’d been tested for — and trusted them enough to believe them about the results. But with a few guidelines in place, I think cross-nursing can be very safe, and it can help in many ways.

I feel lucky to have a mama tribe that practices cross nursing. You can feel squeamish or laugh all you want. Someday I’ll get a job as a wet nurse for some big celebrity. Then I’ll be the one laughing — all the way to the bank.