baby steps to detox your kids from the almighty screen 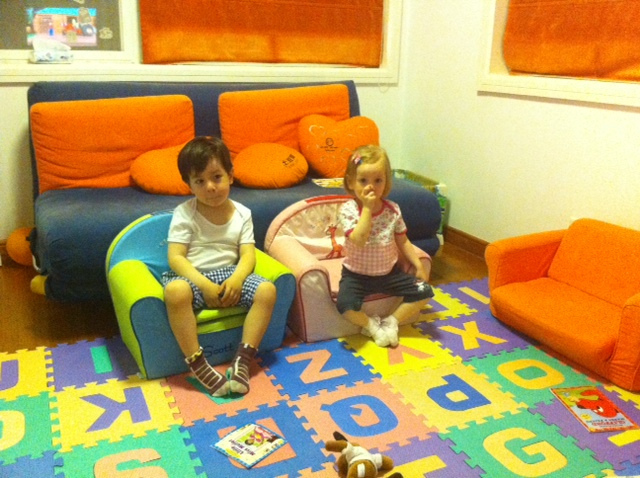 Some people say that kids act better when they don’t watch any TV. Or iphones. Or DVD players. Or any screen, unless a window counts, although of course not a car window because people who don’t watch any TV probably don’t ever drive either.

These people are more eco-friendly, more green, more creative, and generally better parents than I am. They are parents you can make it through the day without needing a TV break. They spend their afternoons doing Pinterest-worthy educational crafts with their two year olds using nothing but materials found in the woods.

I am not one of those parents.

But I did decide recently to cut back on my daughter’s TV habit.

This decision was sparked by a variety of factors. None of them had to do with health or being more green. They mostly had to do with behavior. They culminated on the day she told me “if you don’t do what I want I’m going to kill you” before she flipped me off. She readily admitted that she learned this from television.

(From TV shows that Daddy let her watch, of course. Like Robin Hood. I would never let her watch anything inappropriate for a preschooler. Unless Glee counts. Which she didn’t pay any attention to anyway.)

Anyway. That was when I decided we were going on a TV detox.

I wasn’t ready to give up screens entirely. I’m still not ready. For one thing, I just don’t have the patience to respond in a calm, adult manner when she climbs all over me constantly for hours straight because she’s bored. For another, the baby really needs two naps a day, and he won’t take them in a carrier or in the car or in the stroller or anywhere other than in a quiet house in bed. And much as I think my almost-five-year-old ought to be able to entertain herself quietly for 30 minutes while I put him down, the fact remains that she doesn’t. Not because she can’t, but because the minute she realizes I’m trying to get the baby to nap, she also realizes that this means her playmate will be out of commission for 90 minutes and she follows me to try to keep him awake.

(She knows he needs to sleep, but it’s hard to believe he’s really ready for a nap when the sight of her makes him squeal with joy and jump up to get out of bed. Sometimes I think I should just let her put him to bed. Or not. Lock them in the room for 90 minutes and let them cage match.)

So I am working on baby steps. A gradual screen detox. Maybe eventually we’ll go screen free. But for now, we are cutting back. Here’s how.

1. Sneak in new routines. I used to announce naptime.”It’s time for Teddy’s nap!” I’d say. “You stay out here and be quiet for a little while, and when he’s asleep I’ll come back and play with you.” But announcing this is stupid. My daughter doesn’t hear “It’s naptime.” What she hears is “Come into the bedroom with me and Teddy and make lots of noise and funny faces. See if you can get your brother to laugh so hard he snorts milk out his nose.”

So I’ve started sneaking out instead. I nurse Teddy in the main room till he’s sleepy, and I wait till Anastasia is occupied coloring all over her table with purple marker. Then I just pick Teddy up and carry him to the bedroom when her back is turned. And lock the bedroom door.

Sure, sometimes she’s tried to follow me. Worst case, she’s sat outside the bedroom crying because she can’t get in. But she’s never been loud enough to stop Teddy from falling asleep. And usually she gets over it by the time I come out.

Whether sitting outside my bedroom crying is actually a healthier, more educational, and more eco-friendly activity for her than watching TV is a question I haven’t considered. And I won’t. Ignorance is bliss.

2. Cut back on your own use. I almost never watch TV when the kids are awake. The only show I want to watch is Walking Dead, which, hello? Will never be on when my kids are awake. And is more fun to watch after dark anyway. (Is that a zombie face in the window?) However, I am often tempted by my computer when my kids are around. And my iphone. My computer is full of half-baked articles, blog posts, emails, and forum posts, all begging me to finish writing them. And my phone has The Great and Evil Addiction known as Facebook (which is much worse for me than TV is for kids, probably, but I’m allowed to do unhealthy things. I’m an adult).

I haven’t quit using my screens during the day, but I have come to recognize the signs that it’s time for a break. If my kids are happily playing without me, I’ll sneak a glance at my newsfeed. When either kid comes crawling into my lap and types “SDCE3420$%&(%Sdns0eeeepepf” as my status, I put the screen away.

3. Keep sessions short. We still have TV in our routine, especially at bedtime, because essential self-care (like, you know, brushing teeth) without distraction is an endless fight with my sensory kid. But if she only watched it while we were actually brushing teeth, that would be a mere 5-10 minutes of TV a day. Whereas it’s all too easy to do what we actually do, which is turn it on right after dinner and leave it on till bedtime. So I’m working on keeping the sessions short — just a scene or two instead of an entire show. Or (more likely) entire movie. Whatever. The point is, less is more. Or something.

4. Distract and redirect. Lucky for me, there are two activities that will almost always distract my daughter. Even luckier for me, they’re both healthy, creative, educational activities. Her favorite things in the world to do (besides watching TV) are reading and playing dress up. So now if she asks for TV, I offer a book. If that doesn’t work, I suggest we play dress up. Which pretty much always works. And only requires total and limitless dedication of my mind and body for a minimum of 17 minutes.

And if by some chance that doesn’t work, I can always distract her with Halloween candy.

(Which is totally more healthy than TV. Right?)

5. Lose the remote control. Ok, so that wasn’t exactly something we did on purpose. But it worked beautifully. Our Apple TV remote was last seen in Teddy’s mouth (don’t worry — it’s much too big for him to have swallowed), and since we lost it our TV viewing has gone down by 32.458%. We can still watch TV, because Apple knows you’re going to lose the remote (Apple knows everything) and designed the TV so you can use your iPhone as a remote. But it’s kind of a pain, and it doesn’t always work, so it makes me less likely to even try.

So is all this making a difference? Is our house more peaceful? Is my daughter more calm? Has her behavior improved? Is the baby getting smarter?

I have no idea.

I do think we’re watching less TV. But I haven’t actually timed it. At the very least, I’m pretty sure the TV we are watching is more appropriate for a preschooler.

And more importantly, I’m feeling better about my parenting skills.