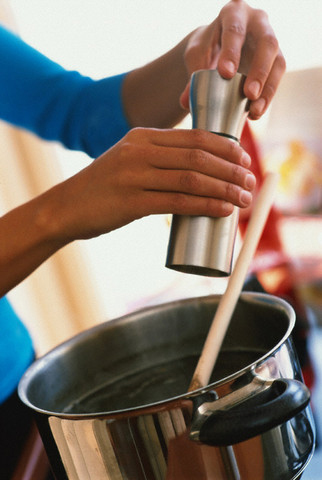 For some reason, anytime I hear anything with “organic” in the name, I associate it with food. Unless it’s a baby carrier or a cloth diaper, I tend to assume that organic means something edible. (And even if it’s not supposed to be edible, it’s probably okay for a baby to chew on. But that’s a whole separate post.)

So when I was talking with my mom about cooking today, I realized how ironic it is that I used “organic” in the name of this blog. Because, even though I do try to eat organic, and I really care about eating healthy, the truth is that food is probably one of the ways my lifestyle is the least organic. Why? Because I’m a terrible cook.

Mind you, I’ve gotten better. I did have a short phase of truly brilliant cooking, the one where I biked to Whole Foods every day, got a bunch of fresh organic ingredients, and spent hours cooking a meal from scratch. New meal every day. That was before I had kids, obviously. I didn’t have a job either. (My husband had a good job, and we lived in a tiny apartment–of course we couldn’t have afforded Whole Foods otherwise!) What I did have was the internet.

But before I had easy access to the internet, cooking was, well, not my strong point.

One of my first attempts at cooking alone was in high school. I was babysitting, and the mom had left popcorn for the kids to eat while they watched a movie. Not microwave popcorn, which was the only kind I’d ever seen before. She had real popcorn. In a pot. On the stove. With oil and everything.

She’d set it all up for me and left all the ingredients on the counter, so I figured it was pretty simple. I turn the stove on, pop the corn, and start a movie. What could go wrong?

I started the popcorn and then went to help the kids choose the movie. A few minutes later, we heard the promising sound of popping coming from the kitchen. Then we heard another sound that wasn’t quite so promising. More like a bang than a pop.

“I’m gonna check on the popcorn,” I told the kids, intending for them to stay and watch the movie. But of course they followed me. They were just as curious about that bang as I was. All three of us reached the kitchen door at the same time–and then all of us ducked as corn kernels flew at our unprotected faces.

“Get back! Get down!” I yelled, frantically waving the kids behind me. I looked around wildly and spotted the source of the problem: the lid of the pan. I’d forgotten to put it on.

After a backward glance to make sure the kids weren’t following, I ran forward, my eyes closed against the flying corn and my hands stretched blindly toward the lid. I groped until I found it and held it up in front of my face like a shield. “Stay down!” I shouted to the kids, and dashing forward in a half-crouch like I was running through a war zone, the lid held firmly in front of my face, I made it to the stove and flung the lid onto the pot.

Oddly enough, that mom never hired me to babysit again.

But that was just the beginning of my kitchen disasters. There was the time I borrowed my roommate’s pot (because of course I didn’t have any cooking utensils of my own) to steam some broccoli. What could be easier than steaming broccoli? I’d gotten the recipe from my sister: basil, butter, fresh broccoli. My roommate didn’t have a steamer, but I found a colander that I thought would work just as well. I was feeling very clever–not only was I cooking, I was improvising! I didn’t even need a real steamer!–until something started to smell funny. It hadn’t occurred to me that putting a plastic colander over a boiling pot of water might cause a problem.

I had to replace my roommate’s colander and her pot. While I was at it, I bought some pots of my own. Because at least then, I figured, it would be my own equipment I’d be destroying.

At some point I discovered that camping equipment is a lot hardier than kitchen equipment, and making a mess outdoors is not as upsetting as making a mess in a kitchen. I decided to only cook while camping. I had this revelation while I was working as a camp counselor for the summer, so the decision worked out well for a while. I became a pretty decent campfire cook. I can still make a mean hobo pack. I even learned to fry donuts and bake cakes in an outdoor hand-dug oven.

This sort of thing worked out well as long as there were other counselors around to stop me from making stupid mistakes. Anytime I was left alone in charge of cooking, we all regretted it. Like the time I was on a canoe trip, and my co-counselor offered to help the kids set up the tents while I made dinner. It was late and we were all hungry, so I thought it would be nice to make the pasta cook as quickly as possible. “How can I make it cook faster?” I thought. “I’ll just put the pasta into the water while it’s still cold, so it’ll start to cook even before the water boils.”

If you don’t know what’s wrong with that, then clearly you’ve never cooked pasta. And let me suggest that you not cook pasta, ever, unless you carefully read and followed directions first. Because if you do what I did, what you cook will not be pasta. It will be a nasty mushy white goo of questionable edibility.

My co-counselor was a real hero that night. He ate his entire serving of pasta and didn’t even make a face. He waited till two days later–after we’d gotten back to camp from the canoe trip–to admit that was the worst dinner he’d ever tasted. By then, I could laugh and agree.

Now that I’m a stay-at-home mom, I cook dinner most nights. It’s usually edible, and I only occasionally destroy kitchen equipment. But I still don’t think of myself as a cook. A true cook doesn’t need recipes; she can invent meals out of her imagination. She can look in the fridge at a collection of leftovers and come up with a delicious, healthy meal that uses up the leftovers so they don’t spoil.

I don’t even aspire to be that kind of cook any more. Fortunately, it’s easy to fake these days. If I want to use up leftovers, I google “ground beef broccoli rice tomatoes cheese recipe” and skim through the results until I see something that looks good. If I’m out of Worcestershire sauce, I google “replacement Worcestershire sauce,” and I find out I can use soy sauce and wine instead. These are the kinds of things that really good cooks just know, but thanks to the internet, I don’t need to know them. I can share the mind of truly great cooks.

But if the internet ever goes down, our family meals will go downhill fast. I give us a couple weeks before we’re stuck with a raw food diet. Either that or spaghetti every night. Because I’ll remember how to cook pasta, internet or no internet. That’s one cooking mistake I’ll never make again.

But I might forget to put the lid on the pot.