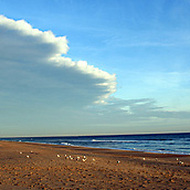 We’re on vacation at the beach this week. Which is wonderful–doubly wonderful as it’s not too crowded since school started in most systems this week–even though I had to buy maternity bathing suits and sundresses just for the trip.

But vacations are awful for trying to live green and eat organic. I’ve been seeing a lot of information in the past few years about staycations–going on vacation but staying home, which is better for the environment because it doesn’t involve traveling–but we’ve never managed to do one ourselves. I don’t think my husband or I would manage to actually stop working if we were still home. (I have enough trouble even when we leave.) But I don’t mind giving myself some leeway on healthy living when I’m on vacation, especially when we’re with extended family. Still, I’ve kind of shocked myself at how many activities-not-recommended-for-pregnancy I’ve managed to cram into this week already. And it’s only Tuesday.

1. I’ve been eating seafood. Lots of it. Hey, I’m at the beach. I know some seafood is fine and some you’re supposed to limit, and I know it has to do with the amount of mercury in that type of fish, which is related to the size of the fish since anything higher up the food chain has higher mercury concentrations. But I can never remember which seafood you’re supposed to avoid. And I didn’t want to look it up for fear I wasn’t supposed to eat crab, because I haven’t had crab in years and I was craving it.

I should also mention that I picked the king crab instead of the Maryland crab when we went out last night, even though the latter would have been more local (we’re in Virginia Beach). Eco-fail.

2. I surfed with a boogie board. I have no idea if this is officially “not recommended” during pregnant. But it should be. I think it took me an hour to catch my breath. But it was well worth it. I might have to do it again today, just for a minute. Haven’t tried that since I was a kid!

3. I got in the hot tub. Only for very brief periods. And I stayed hydrated. But I have no idea what temperature that tub is, and it’s definitely higher than 98 degrees. It’s not any hotter than I make my baths, though.

4. I’ve eaten lots of fried foods and caffeine. I’m trying to have at least one salad every day (my midwife wants me to have like six servings of raw vegetables, but I have a hard time hitting that goal even when I’m at home). Oh, well. One week won’t kill my nutrition, right?

They’re not organic salads either. Seriously, it’s not easy to find organic food in Virginia Beach. We went grocery shopping at Walmart. I don’t think I’ve ever done that before.

5. This has nothing to do with living organically, but it definitely should be one of the things you’re not allowed to do while pregnant. I let my sister-in-law take a picture of me in a bathing suit. Seriously, don’t do this when you’re pregnant. At least not if you carry a baby like I do. You will not be happy about it. It’s not good for your bad pregnancy attitude.