what to do instead of kegels 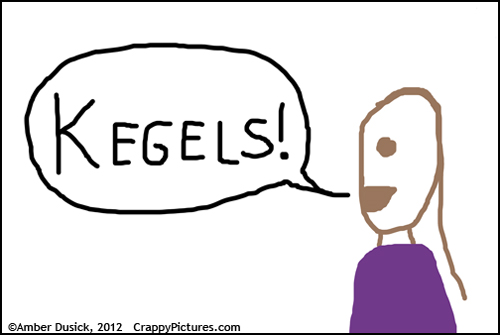 So. Kegels. They are weird. I have never been a fan.

People just make such a big deal of them. They’re up there with mammograms and Pap smears on the list of things that women are supposed to do. But it doesn’t make sense to me. It seems like if something were so important, it would feel more, well, natural. Instead of feeling so weird that I’m pretty sure I’ve never done them right. If I had, I wouldn’t know it. As far as I can figure, there’s no way of telling.

Except maybe in France there is. (Not surprising.)

So I was actually pretty excited when I heard that Kegels may not be a good idea. We’re supposed to do squats instead. This makes a lot of sense. Squats are normal and natural. Peeing while squatting? Even more natural.

Peeing while squatting in my house, on the other hand, not so natural.

But there are several ways to remedy this.

First, of course, is peeing in the shower. Simple, easy, and it has the added benefit of setting a good example for your EC baby. Or a bad example. Or something.

Second, there’s peeing in the bathtub. For some reason this strikes me as much grosser than peeing in the shower. Probably because it is much grosser. Because your baby sits in the bathtub. But if you don’t have a stand-alone shower, then you can use this as an excuse (or inspiration) to clean your tub. I’m not going to claim this has ever inspired me. But I do have a stand-alone shower.

Picture taken from Crappy Pictures, the funniest parenting blog of all time.