yeast and breastfeeding and gentian violet, oh my! 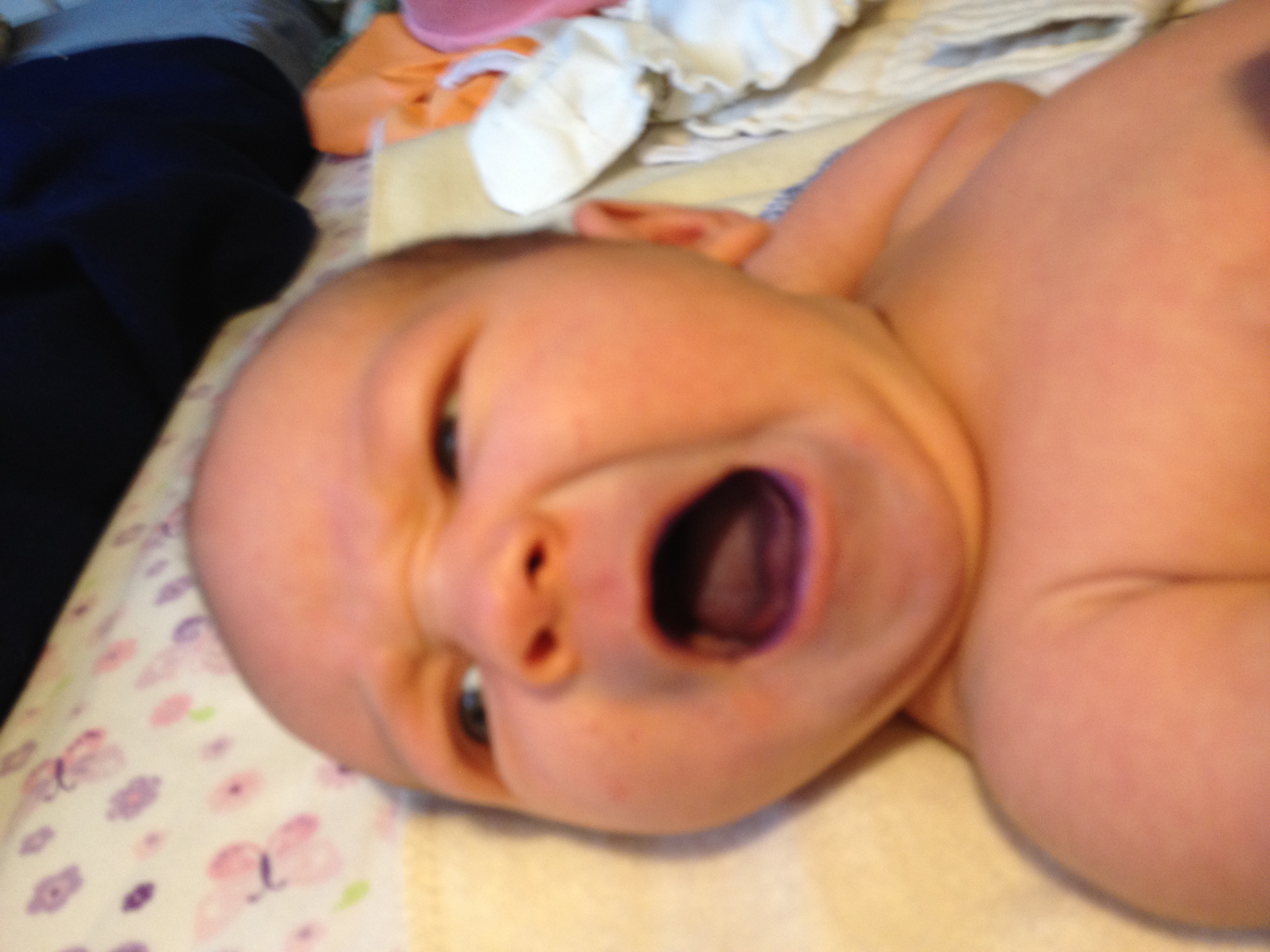 It’s the end of the world in the Baker household: my baby’s diaper rash came back.

And it’s ugly. I’m still not sure if it’s really yeast, but I have a feeling it is. There are these bright red spots that just seem like something more than contact rash. Especially since he’s barely been wearing diapers.

And yesterday I felt a pain during breastfeeding that may have been a thrush infection. It could also have been normal discomfort of breastfeeding a preschooler who’s draped across my body and nursing while kicking her feet, waving at her brother, and singing the alphabet song. Or whatever. But in any case, there was some pain, and even though it wasn’t anywhere near as bad as the discomfort I felt during pregnancy, it scared me. After a little research, I decided to assume it was thrush and treat it aggressively before it got worse. Can’t hurt, right? If it is thrush, better to catch it early.

So off I went to Sevananda for essential oils and probiotics.

I also went to Target pharmacy, because my doctor gave us a prescription for Nystatin when she saw Teddy’s rash last week. I was hesitant to use it, but I figure if I’m assuming this is thrush then I had better treat it on all fronts. The first problem was figuring out the cloth diaper issue–I don’t want Nystatin getting on my cloth diapers–so I ordered some Kushies flushable liners to protect my diapers. Don’t know why I didn’t think of that earlier. They’ll take a few days to get here, so in the meantime I cut up an old receiving blanket into liners. I haven’t decided yet if I’ll wash those liners or just throw them out, but I’ll probably throw them out to avoid worrying about the cream getting into my diapers in the laundry. It’s only a few days, and I’ll only be using Nystatin twice a day–I don’t mind throwing out a receiving blanket or two.

That will also solve the problem of reinfection from the diapers, at least temporarily. However, I’m going to add some yeast-killing steps to my regular laundry routine until this is cleared up–it’ll be good to use for my clothes as well as the diapers, anyway. I’ll be washing all my diapers and bras in my awesome washing machine’s sanitary cycle, adding oxygen bleach to the wash, and adding tea tree oil to the rinse. I’ll also do a second rinse with grapefruit seed extract and dry on high heat. Then after Teddy and I are both symptom-free for two weeks, I’ll strip all my diapers and do a full yeast protocol. Until then, I’ll use the flushable liners.

Finally, I started treating myself. I started taking probiotics, of course–I should be taking them all the time anyway, but I always forget to get more when I run out. And I bought some gentian violet.

I was hesitant about the gentian violet. I’ve heard mixed reviews, but Jack Newman recommends it, and I really respect him. It seems like one of the simplest and most effective topical remedies, especially since it only requires three days of treatment instead of weeks. And I figured it couldn’t hurt.

Little did I know.

The potential problem of staining clothes was easy: I have an old purple shirt that’s one of my favorite nighttime shirts anyway. I also put on an old breastfeeding tank that I hate and never wear (and that also happens to be black). No problem there.

Then I gathered my courage and put the gentian violet on my nipples.

It actually looks kind of cool. I mean, I’m not going to post a picture or anything, but there’s something kind of fun about purple boobs. It’s almost like a tattoo or something. It’s kind of pretty.

Then I nursed Teddy. That did not look as cool. I guess my nipples are bigger than his mouth. Or he drooled while he was nursing. Or something. I was expecting the inside of his mouth to be purple; I was not expecting his entire face to be purple. It’s not really his entire face–just his chin and cheeks and up to his nose. He looks like a vampire baby. Or a little old man with a purple beard and mustache.

Finally, I went to nurse Anastasia. Because obviously we all have to get treated for this if it’s really a thrush infection.

And that’s when things got difficult.

I explained to her that I had medicine on my boob and that she needed the medicine in her mouth, and I told her it was purple. But when I offered her my boob, she burst into tears.

“I don’t want my mouth to be purple!” she sobbed. “People will think I look weird!”

Keep in mind that this is a girl who has never refused an opportunity to nurse. Not once in almost four years has she turned down the boob. My breasts are like magic magnets for her mouth: anytime she sees them, she gravitates to them. But not this time.

I almost cried too.

That was when I realized how much I love tandem nursing. I would be really, really sad if Anastasia weaned because of this. I know she’s plenty old enough to wean, and she’s old enough to choose to accept having a purple mouth for a few days as the price of continuing to nurse. Or to accept not nursing because she doesn’t want the medicine.

But I really don’t want to have to force her to make that choice.

So I’m trying to figure out other ways to treat her. I’m hesitant about insisting that she accept the gentian violet if she wants to keep nursing, especially since I’m not completely positive that any of us even have thrush in the first place and I’m really doing this treatment proactively rather than reactively. But I also really don’t want to be dealing with recurring thrush infections for the next few months.

I may try grapefruit seed extract for her, but that tastes bad and I’m not sure if it works if it’s put into something. I will probably give her probiotics, but I’m sure that won’t solve the problem by itself.

Or maybe I’ll get lucky, and she’ll decide she doesn’t mind my purple nipples.

Thrush isn’t really the end of the world, is it?