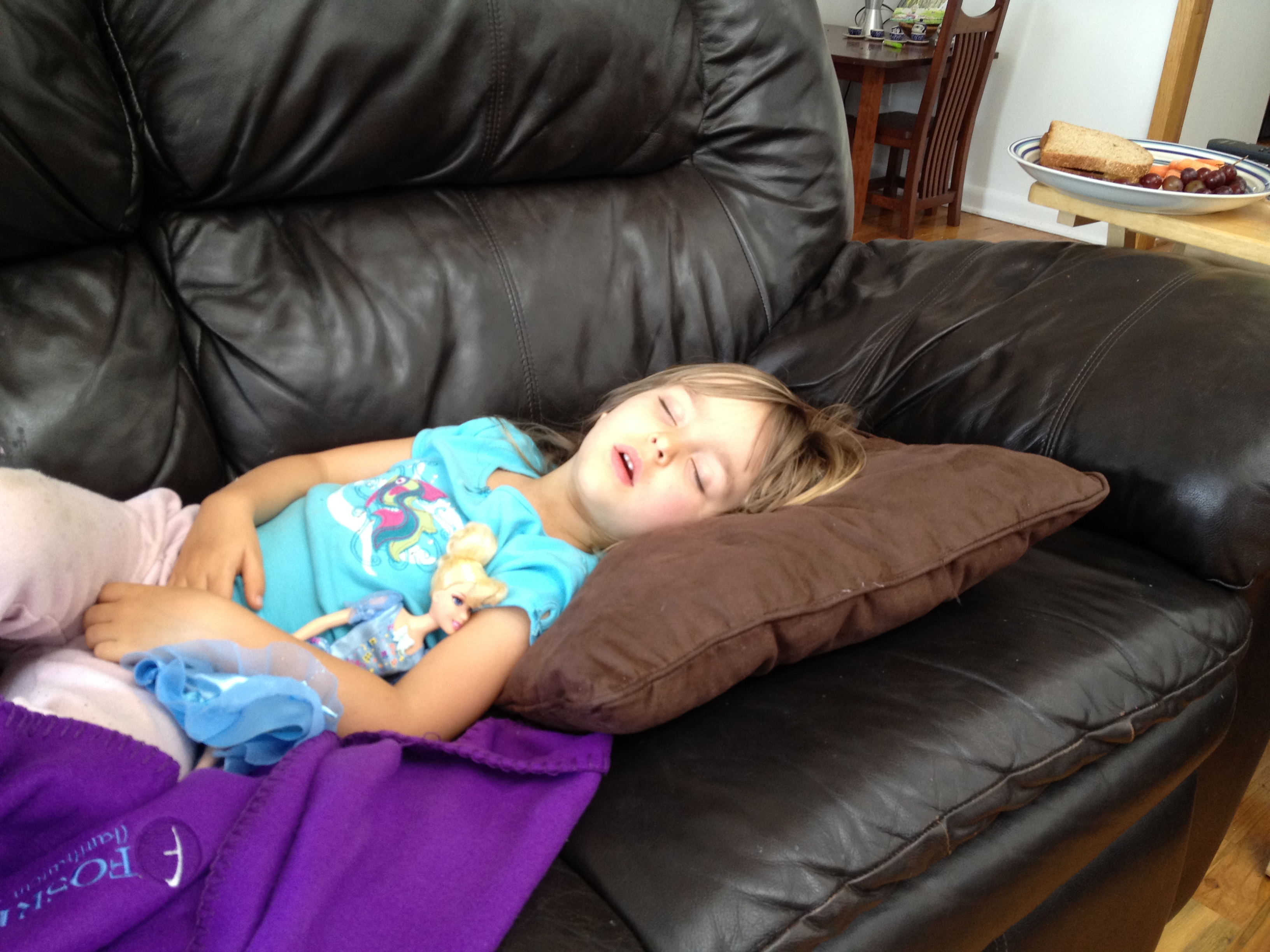 Consider it true confession Friday. I’m feeling a little guilty, because Anastasia has been watching tv for the better part of a day and a half. I know–not at all organic, free range, or attachment. Sometimes I suck at this stuff.

But the truth is that there are a few times when I let my kid watch tv and don’t even feel that bad about it. Right now is one of them. It’s partly the effect of a few years of parenting–I was adamant about NO SCREEN TIME when my daughter was under two, but once I opened the door with the occasional showing of Mary Poppins, thing got gradually more lax. Mary Poppins was like our gateway drug to tv. But it’s mostly the effect of sleep deprivation. Several years of sleep deprivation permanently changes your brain chemistry, I’m convinced of it. It makes you no longer care so much about overachieving in areas that used to seem very important. When you’re tired enough, you Just. Don’t. Care.

Also, when you have a newborn, and it’s your first baby, you really want them to be smart. You want to do everything possible to give them the best start in life and stimulate their development and all that stuff. But by the time you have a four year old, you realize that’s a terrible idea. You start doing everything you can to discourage intelligence, because your kid is on the verge of being smarter than you are. And that’s a terrifying thought.

So anyway, my daughter is watching tv today, because she’s sick. Which brings me to my list: five times when I let her watch tv.

1. Sickness. When I was a kid, being sick meant we went to the video rental store (this was long before Blockbuster, so we went to the locally-owned video rental store which was called Dave’s Videos or something like that) and picking out three or four movies I’d never seen before. When my sister and I were both sick, we each got to pick several movies. Then we went home and watched them all. And even though I try to parent thoughtfully instead of just doing things the way my parents did, I think this is a pretty decent idea. Because it forces high-energy kids to sit still, which is what they need to do to get better. It’s also really helpful when a child is too sick to go anywhere but not sick enough to just sleep all day. I used to just read to her all day, but that’s a lot harder to do when you have a newborn you’re trying to keep somewhat separate from the sick kid.

2. Sleeplessness. I avoided this for a long, long time, but when my daughter quit napping entirely at 18 months, keeping her happy and entertained for those long, long afternoons was, well, a nightmare. So after she turned two, there were days when I let tv replace a nap. Again, at least it forced her to sit still and rest. She never actually fell asleep in front of it, although that was the theory when I first tried it. But at least she stopped moving for a while. That had to count for something, right?

3. Personal hygiene. My daughter has tactile oversensitivity, which means that certain tactile stimulation really, really bothers her. Mostly water. For a long time, convincing her to take a bath was like trying to negotiate peace in the Middle East. It took hours to get her in without a fit. At some point, I figured out that if she was watching tv, she didn’t mind water. The tv distracted her. So we did bucket baths in the living room. Sometimes you just gotta do what works. We still use tv for tooth brushing. It makes bedtime go much more smoothly.

4. Pregnancy. Mine, obviously. When I was pregnant with Teddy, I became so incredibly exhausted every day at 3 pm that I couldn’t possibly keep my eyes open a second longer. Some days I would just fall asleep on the couch while Anastasia was playing–or rather, while she was piling toys on top of me, pulling at my hands and my hair, and trying to get me to play with her. But other days, when I just had to have a real nap, I would put on a movie for her.

5. Work. Yes, it’s awful, but I’ve done it: I’ve put on a movie simply because I had to work. I really try to avoid this. But occasionally you just have to do something on the computer that you can’t do with a preschooler sitting in your lap pushing the caps lock button over and over so she can see the light come on and begging to type her name.

But blogging doesn’t count as work. Neither does surfing Diaper Swappers for EC trainers. I swear.

And even though I really do manage to avoid it most of the time, tv is probably my biggest area of guilt as a natural/attachment parent. What’s yours?