having a second child 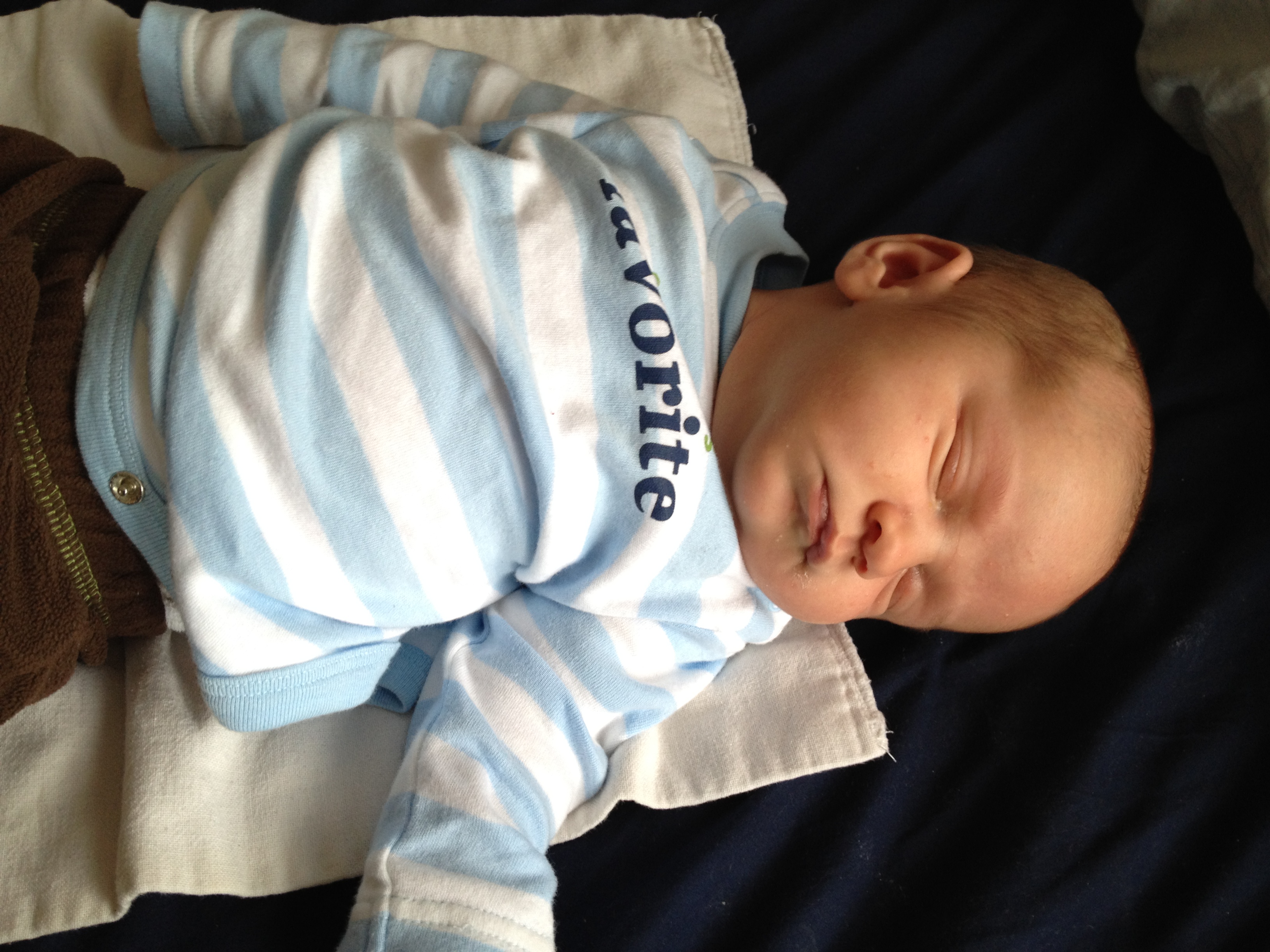 I heard a friend say recently that second babies are born to make fools of Mama.

I wouldn’t say that Teddy is making a fool of me–Anastasia pretty much has that covered–but he certainly is showing me how different babies can be. If I hadn’t birthed both of them, I’d find it hard to believe that he and Anastasia are part of the same species, let alone the same family. Of course he’s only three weeks old, so he hasn’t demonstrated that much personality yet, but so far, taking care of him is so different from caring from Anastasia that I can’t even compare the two.

I’ve written before about my experience of caring for a newborn when Anastasia was little, and I think I summed it up pretty well then. I didn’t even use the bathroom till somebody else was there to hold her until she was at least a month old. And even though I knew she was a high-needs baby, I honestly thought that my experience of never being able to set her down without causing desperate screaming was pretty much normal for a young baby. I thought that was just how babies are.

Turns out it’s just how Anastasia was.

Now, I know what you’re thinking: part of the reason why Teddy is so much easier is because I’m more experienced and better at parenting. While this may be a slight factor–a very small one–let me assure you: it’s not the main reason. Trust me on this. Sure, I know more techniques now for soothing a baby or getting a baby to sleep than I did when Anastasia was born (because I had to learn every technique in the book and then some!), but honestly, I haven’t had to use most of them. Teddy is just an easy baby.

I had no idea this kind of baby even existed. I thought people were lying when they told me they could set their baby down and it wouldn’t cry.

So to all my friends who told me that when Anastasia was little: I’m sorry for thinking you were lying. I believe you now.

Sort of. Except that I can still hardly believe it myself.

So, for those other parents of high-needs babies who don’t believe it, here’s what it’s like to breastfeed a laid-back newborn. In case you ever dare to have more children, and you’re lucky enough to have one that isn’t high-needs, here’s what it can look like. Maybe.

1. It’s morning. You wake up because baby is wiggling and grunting a little. Not crying. Just grunting. Very cute. Open your eyes and see that baby is rooting. Put boob in baby’s mouth without getting up, because you’re cosleeping and this baby has an amazing perfect latch and could nurse lying down from the day he was born (it took Anastasia several months to learn to do that). He latches on happily and nurses. You doze.

2. After a few minutes, realize that he is still wiggling and grunting, and now he’s farting. Clearly he needs to poop. You don’t feel like sitting up, so you mumble to him that he can poop in his diaper and you’ll change it in a minute. He continues to fart noisily. After a few minutes, he relaxes, so you decide that he’s probably done pooping. Sit up so you can change him.

3. Take his diaper off and discover that not only has he not pooped yet, but his diaper is dry. Because he is a happy EC baby and waits for you to take his diaper off. He’s cool like that. Hold him over the potty. He poops and pees. (No, this doesn’t happen all the time–if it did, I wouldn’t use a diaper at all. But it did happen twice last night. I tried to wait till he had pooped in his diaper, and he waited till I took it off to go.)

3. Wipe baby’s bum, replace clean diaper, lie back down, and re-latch. He goes back to sleep. After five minutes, he unlatches. And stays asleep. Because unlike a high-needs baby, he does not require a nipple in his mouth at all times in order to sleep. Who knew?

4. Decide to get up. Roll away from baby and get out of bed. Shockingly, this movement does not disturb him. At all. Because he likes to sleep. He stays asleep.

5. Pee, brush teeth, and get dressed. Maybe even take a shower. It’s possible to take a shower when your baby is under a month old?!? Yes, my friends, it’s possible. I did it this morning. He did wake up at the very end of my shower and cry a little, but only for about a minute. And then I nursed him for five minutes and he went back to sleep.

6. Decide to leave baby in bed while you get breakfast. Because, you know, he’s happy, so why disturb him? Go into the kitchen (take note: you are now in a different room from your baby, and your baby is not crying! He is happily sleeping without you! He does not have a magic radar that operates even while in the deepest sleep that tells him to wake up and scream whenever you are more than three feet away from him!) and make yourself cereal and coffee. Sit down on the couch and eat in a leisurely fashion while reading your Facebook newsfeed. Start writing a blog post.

7. Baby cries. He’s awake! Dash into the bedroom. Take off his diaper, which is wet. Offer the potty, and he pees again. Dress him again (in underwear this time) and put him in the sling. Nurse him. He goes back to sleep.

8. After a few minutes, he unlatches himself. You work on your blog post while wearing him. He sleeps happily for 90 minutes.

9. Around lunchtime he wakes, pees and poops in potty, and stays awake happily looking around the room for about 45 minutes. Then he cries a little, and you pee him in the potty again. Then you put him back in the sling and nurse him, and he goes back to sleep.

10. Sometime in the afternoon, you swaddle him and put him back in bed. And he sleeps by himself again. For two hours. Every thirty minutes, sneak into the bedroom to make sure he’s still breathing. He is.

11. Around dinnertime, he wakes and is happily alert for about 45 minutes. When he starts to look sleepy, you put on a nighttime diaper, swaddle him again, and lie down with him in bed. He nurses, and in 15 minutes he is asleep. Unlatch him and roll away, and he stays asleep. For three hours this time. You have the whole evening to relax. But you still sneak back into the bedroom every thirty minutes to make sure he’s still breathing.

12. Go to bed. He wakes, nurses, and goes back to sleep. Three or four hours later, he wakes again to poop, nurse, and go back to sleep.

And that’s what my days look like right now.

I’m actually getting more sleep with a newborn than I got when Anastasia was two.

Now, I realize that he may not always be like this. Parenting Teddy will have its own unique challenges, and I’ll have to learn a whole new set of techniques and tricks for the difficult things he does. Which will probably be things that Anastasia never dreamed of doing. And I guess that’s why second babies make fools of Mama: you think you know how to handle the problems that come up with kids, and then your second kid brings a whole new set of problems and behaviors that your first never prepared you to deal with. And all the tricks you learned from your first kid that made you feel like you knew what you were doing become useless for your second.

However. There is one thing I’ve learned already from my second round of parenting. And I knew this, and I’ve written about it before, but Teddy is making it so much more obvious to me, and I think it bears repeating. Often. So I’ll say it again:

Good parenting means parenting the child, not following a parenting style. So many moms I know feel judged because their parenting doesn’t fit a particular “style.” They’re too mainstream for their attachment parenting friends and too crunchy for their mainstream friends. But–and I only just figured this out–I’m pretty sure that the attachment parenting “rules” were developed in response to a high-needs baby. Babies like that really do need you to hold them 24/7 and nurse them all the time and be with them constantly. AP was invented to give parents permission to do all that stuff for babies who need it. If your baby doesn’t need it, then you don’t have to do all that stuff. Really. You don’t. It doesn’t make you any less responsive of a parent if you’re responding to what your baby needs. I held or wore Anastasia every minute of every day and night for a year. Because she screamed if I put her down. Teddy is less than a month old, and he’s regularly sleeping for several hours by himself. But I’m still the same parent. I’m not any less responsive to him than I was to her. I am every bit as much of an “attached parent” to him as I was to her. I’m doing my best to meet his needs every minute of every day, just like I did for her. He just needs less.

If your baby is happy and healthy, and everyone else in your family (including you) is too, then you’re doing it right.